The Future of Public Education in Kazakhstan 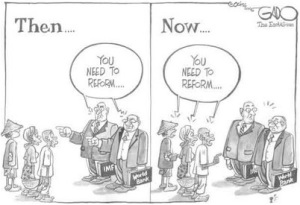 The main goal of the program is to develop human capital for sustainable growth of the economy by providing access to quality education. The program states that education should be considered as an investment in knowledge economy. According to the program, growing evidence shows that investments in education have impact on the economic growth of the country. Creating Public Private Partnerships  (PPPs) and new schemes of financing are listed as top goals in order to develop equal access to education for all. Let us take a closer look at the new schemes of financing of public education.

By 2015, per capita funding will be introduced in all educational establishments, which means that funding of schools will depend on the number of students that attend a respective school. What about village schools? Does it mean that some of them might be closed because there will be not enough students?

A proposed new educational savings plan system would supposedly enable families of different socioeconomic backgrounds to afford postsecondary education by letting them save money ahead of time. However, this system builds on the assumption that postsecondary education will be so expensive that you will have to start saving money up to 20 years ahead of time!  While the Minister of Education states that the number of scholarships in universities will increase, the creation of an educational savings plan system raises concerns over the price of higher and professional education in the country.

Attracting private investors in education is said to be of an utmost importance for the future of education and science. It is expected to increase funding of universities by 10 percent by 2014 through PPPs and to integrate education and science through commercialization of science. For the purposes of lifelong learning, employers will be responsible for co-financing education of the employees. The expected outcome of the program is that by 2025 financing of education in Kazakhstan will be similar to the models in the “developed” countries.

The biggest concern is that “Western” education is grossly generalized and overly idealized. There is no evidence that a simple injection of private funds into the public education system would improve the quality of education. Furthermore, privatization of public education is likely to intensify socioeconomic inequities. According to Businessinsider.com, USA is one of the world leaders in spending money on education and its schools are ranked as “average” by international assessment organizations. Moreover, education privatization trends in some “developed” countries also reveal that people with more money may have access to higher quality education. Furthermore, individual private funders – and not necessarily the broader education stakeholder community – have a bigger say in shaping the educational policy as we learnt from the involvement of Melinda and Gates Foundation and Zuckerberg initiatives in New Jersey.

Unfortunately, the strategic plan 2011-2020 did not involve careful critical analysis of “western” educational systems. The content of the program is shockingly similar to the neoliberal policies promoted by the World Bank: education, human capital, and knowledge economy. However, it is not possible to simply borrow educational practices from the US or any other “developed” country and implement them in Kazakhstan due to different political, socio-economic, and cultural contexts. In Education plc: understanding private sector participation in public sector education, Stephen Ball provides an extensive analysis of harmful effects of privatization trends in education that take place in the “developed” world. Moreover, Ball criticizes that the “means/end” logic of education for economic competitiveness is negatively transforming previously complex processes of teaching and learning into a “set of standardised and measurable products.” Education should support students to become responsible citizens, persons with high ethical standards and multifaceted personalities, rather than creating a generation of “test-takers” for the purposes of questionable economic growth.

One thought on “The Future of Public Education in Kazakhstan”