What is the function of standardized testing for Public Education in United States? 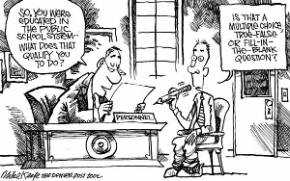 “Testing, testing, testing, the children are crammed with testing,” said Mr. Milton Gaither, PhD (2013). I often heard that standardized testing is a mandate for students in most grades in public schools in America and I am wondering what is the role of standardized testing for children? What are the objectives of public education in the United States?
We all know that one of the objectives of education is to prepare students for academic success and good citizenship. It is well known that America is one of the wealthiest countries in the world. Yet there is still a high rate of poverty, unemployment, inequality, violence, and crime here. Although we must not take it for granted that education will solve everything, it’s obviously a tool for social change.
According to the Associate Press of Commercial Broadcast Television Network in Washington, DC (CBSDC/AP), 16% of Americans live in poverty and it increased from 49 million to 49.7 million in 2011.  Of those living in poverty, 20% are children. Based on the International Labor Organization (ILO) data, as of February 2013 there are about 16% of youth who are unemployed;this percentage is high compared to other OECD countries, according to Guardian.
Another shocking statistic is regarding crime in public schools in America. For example, during the school year 2009-10, 85% of public schools recorded one or more criminal incidents. There were about 33 students associated with violent deaths and an estimated 1.9 million crimes took place in schools. Meanwhile, gang activities and bullying are increasing in public schools, according to the National Center for Education statistics (2011).This context prompts a number of questions. Should the school curriculum be more meaningful and reflect current issues in America? What are the solutions for the state in reducing unemployment, crime, and promoting poverty reduction? Shouldn’t education be playing a better role? Is basic literacy and numeracy enough to make someone educated?
Education also aims to develop students’ behavior and put them on a path to success, in addition to hopefully settling social issues.  However, there is a disconnect between the school curriculum and the context of America. For example, standardized  testing in public schools is a mandate for the students in all grades. Basically, the students are trying to work hard just for the testing.
I would suggest that standard assessment test should be more meaningful than current standardized test.If we say that education aims to prepare students for success, then I would say that project-based assessment test is very useful for the students. According to the Globalschoolnet.org, project-based assessment is an effective tool to measure the performance and the growth of the students through their project-based learning. The assessment strategies include the multiple instruments such as performance, observations, evaluation, personal communications, quiz, and others. The function of the project-based assessment contributes to the future works of the students, for example, the project design, implementation, and evaluation.  I think the project-based learning is a better way of learning how to work and to achieve something with a clear mission in any field of work. The students could see their achievements at the end of the project.
In his blog, Andrew Miller recommends the formative assessment for the project-based learning, which includes exit slip, worksheet, and draft or quiz due often. The formative assessment is conducted as an ongoing process and keeps track of the project-based learning to make sure it is transparent for the students and the parents. It also measures the work toward the standard of each student’s performance.
In all, the standardized testing for almost all grades is a waste of time. We do not need to have standardized testing for most grades in public schools in order to improve basic literacy and numeracy for the students. The school curriculum should reflect the current context of America, yet the standardized testing tends to take a huge part in the curriculum. Because standardized tests are mandated, students have to spend the majority of their time  preparing for the test rather than learning many important things in the current context of America. On the other hand, the assessment test should be more useful for the students. The Project Based Assessment Test seems to be more meaningful than standardized test in terms of preparing students for their success and future lives.

One thought on “What is the function of standardized testing for Public Education in United States?”